Earlier this month, members of the European Horizons chapter at FIR joined thousands of young Europeans to gather at the European Parliament in Strasbourg for the 2021 edition of the European Youth Event (EYE), which spans 160 activities over two days and whose outcomes contribute to the Conference on the Future of Europe. European Horizons is a student-led policy think tank that empowers the youth to voice and incubate their ideas to foster a more united Europe and a stronger transatlantic bond.

Julian and Samuel, you represented the Faculty of International Relations during the event. Could you please share with us, how did you enjoy it?

Julian Stöckle: “It was honestly amazing to meet other passionate young people from across Europe finally in-person again and not just through a screen. Samu and I were able to get to know some of our fellow team members at European Horizons for the first time in real life. The events and activities at EYE dealt with a broad spectrum of issues, ranging from climate change to youth activism and Europe’s role in the world. This made it certainly an enriching experience. Also, Strasbourg is a vibrant and beautiful city that is definitely worth a visit for anyone who hasn’t been!”

Samuel Pelech: “The European Youth Event had an amazing impact on me, not only did I have the opportunity to represent our Prague Chapter of European Horizons but also I got to meet a lot of amazing and inspiring people from all around the world. It was a real pleasure for me to finally meet many members of our organisation in person after more than a year of online conferences and calls. Also, I can’t forget to mention that strolling through the building of the European Parliament and attending various workshops was very impressive!”

What were the most important/interesting observations you experienced at the event? (e.g. important topics, future of EU, etc.)

Samuel Pelech: “I was pleasantly surprised by how many young and ambitious people came to discuss current issues in the European Union. During the event, it was interesting to see how the speakers and MEPs were open to discuss the issues with young people and listen to their ideas of Europe. Together we were able to create a very positive vision for the future of Europe.”

Julian Stöckle: “I totally agree, I really felt inspired and energized by the youth vibes at the event. It was great to see that so many young people from all walks of a young life came together and enthusiastically discussed ideas about our future to improve the status quo. Platforms such as EYE which empower young people to get their opinions and ideas across to policymakers are crucial. One proposal particularly resonated with me. That is that going a step further and implementing structural mechanisms which ensure young people’s voices are heard and adequately reflected in decision making processes is critical if we want young people to become politically active and guarantee generational equity.”

What was the crisis simulation about?

Samuel Pelech: “In the crisis simulation, our participants were tasked to respond to a cyberattack against a hospital during a deadly heatwave. The main idea was that our participants should develop the response to the critical situation and react in an appropriate way. The attendees were split into four groups representing the U.S., Spain, the European Union and NATO, and had to develop their own response within the team. It was very interesting to see how the heterogeneous participants’ groups responded to different situations.”

Julian Stöckle: “The challenges we nowadays face are increasingly complex and diverse, whether that’s climate change or cybersecurity. This calls for an unprecedented extent of leadership and cooperation. We wanted to give our participants an idea of how difficult it can be to navigate through unpredictable situations with conflicting interests and information. We chose to design the simulation in a strongly interactive way so that they could get hands-on experience, and are pleased to have received very positive feedback from our 43 participants. Shootout to our main organizers who did an outstanding job putting this together!”

What did the event bring you personally?

Samuel Pelech: “For me personally, this was a very important event because for the first time I got to know my colleagues from the global network of European Horizons and I felt impressed!

Together with Julian, we were able to network with professionals and listen to their responses to current problems of the EU. Two very enriching days in Strasbourg with a lot of fun!”

Julian Stöckle: “I certainly feel inspired and motivated to keep engaging in European Affairs. At European Horizons, we aim to equip our members with the skills, experience and confidence so that they can influence policy decisions and have their say in the future of the European Union. I feel ever more convinced that this way, we can truly contribute to more rigorously including young people’s voices in policymaking. In addition, I could deepen existing friendships and make new ones, and really look forward to reconnecting at our upcoming retreat in Brussels soon and virtually in the meantime!” 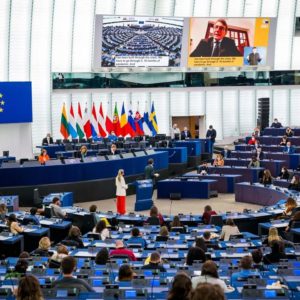 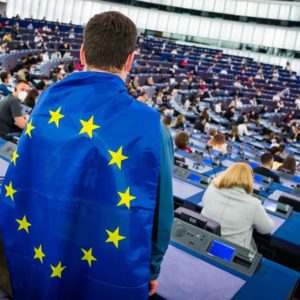